Targets and Treatments for Alopecia

Prostaglandin D2 synthase (PTGDS) is elevated in bald scalps compared to haired scalps of men with androgenetic alopecia (AGA). Prostaglandin D2 (PGD2), the product of PTGDS enzyme activity, is similarly elevated in bald scalps. In a study focused on the synthase, both in mouse (Ptgds) and in human (PTGDS), demonstrated that PGD2 inhibits hair growth in explanted human hair follicles and when applied topically to mice.1 The authors found a direct inhibitory effect of PGD2 on hair growth that could be attributed to its action on PGD2 receptor 2 (CRTH2), a human protein encoded by the PTGDR2 gene and GPR44. Therefore, this study defined PGD2 as an inhibitor of hair growth in AGA and proposed the PGD2-CRTH2 pathway as a potential target for treatment.

In CRTH2 knockout mice, PGD2 did not inhibit hair growth.1,2 Moreover, PGD2 inhibited hair follicle regeneration in a mouse model of dermal injury in a CRTH2-dependent manner.2 A new approach currently under investigation is the use of a CRTH2 antagonist to overcome the growth inhibitory effect.

The Wnt pathway is also being explored more fully for the induction of anagen. A topical Wnt (SM04554) demonstrated induction of follicular proliferation and shortened the transition from telogen to anagen with hair growth becoming prevalent by week 3.3 When compared in a mouse model with 5% minoxidil, the study drug demonstrated significant more hair growth.3 Preclinical and clinical findings support new development and have increased non-vellus hair counts with treatment of SM04554 compared to vehicle. In the phase 2 clinical studies, the drug has shown to be safe and well tolerated as well increased in hair growth macrophotographic and biopsy studies.4

Platelet-rich plasma (PRP) is gaining traction in the field of alopecia as it can promote hair growth via cytokine interaction and has demonstrated hair growth in AGA as well as other alopecia disorders.5 The effectiveness of this treatment was evaluated by comparing pre and post PRP histology in AGA (Table),5 Although randomized clinical trials are needed, this study provides preliminary data supporting the positive therapeutic effect of PRP on hair follicle regeneration.

Alopecia areata (AA) and other scarring alopecias occur as a result of the loss of immune privilege in the hair follicle. The normal immune privilege is counteracted by the infiltration of TNF-α (increases Th17 cells and IL-17 levels) and CD8 killer T cell proliferation. JAK inhibition has been shown to reverse alopecia areata.6,7 JAK inhibitors can be administered orally or used topically and represent a promising new class of medications for AA.8 The safety profile of some JAK inhibitors are of some concern as patients may have increased susceptibility to infection as well as to some cancers.8

Tofacitinib has shown promising results in a study of adult patients with AA, alopecia totalis (AT), and alopecia universalis (AU). Of 65 potential responders to therapy, defined as those with AT or AU with duration of current episode of disease of 10 years or less or AA, 77% achieved a clinical response, with 58% of patients achieving greater than 50% change in Severity of Alopecia Tool score over 4 to 18 months of treatment.9 In this study, no serious adverse events were reported and tofacitinib was well-tolerated.

In a study of oral ruxolitinib, 9 (77%) out of 12 patients with moderate-to-severe AA demonstrated a remarkable response to treatment, with average hair regrowth of 92% at the end of therapy.10 Moreover, in this study the gene expression profiling revealed treatment-related downregulation of inflammatory markers, including signatures for cytotoxic T lymphocytes and IFN response genes, and upregulation of hair-specific markers.

In a 2-center, open-label, single-arm trial, tofacitinib 5 mg was given twice daily for 3 months in patients AA with > 50% scalp hair loss, AT and AU.11 Of 66 subjects treated, 32% experienced 50% or greater improvement in severity of alopecia tool score. This study confirmed that tofacitinib is a safe and effective treatment for severe AA, though it does not result in a durable response.

It has recently been demonstrated that IL-2, IL-9, and IL-15 are upregulated in AA lesions and are key drivers of the pathologic cytotoxic T-cell and natural killer cell activity in AA.7,12

Current early investigations are under way for an upstream inhibitor (BNZ-1) that would limit signaling of IL-2, IL-9, and IL-15. This approach would limit side effects now seen with JAK inhibitors.

Of note, fecal microbiome treatments or fecal microbiota transplantation (FMT) are currently available for other conditions and are now being looked at for use in patients with AA. As the microbiome approach is gaining popularity, FMT is definitely getting major buzz and even might be included in future therapies. 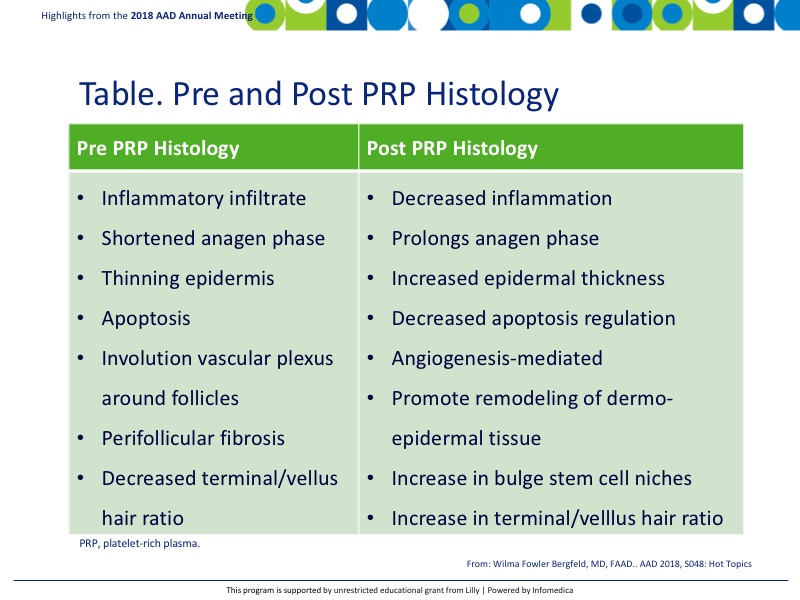 
Present disclosure: The presenter has reported that she is an advisor and investigator for Allergan, Incyte, Concert, Aclaris, Cassiopea, J&J, Bioniz, Samumed, Pfizer, Lilly, Bayer Health, and P&G.