Presented by: Emma Guttman, MD, PhD, FAAD
Professor of Dermatology and Vice Chair of the Dept. of Dermatology, the Icahn School of Medicine at Mount Sinai, New York, NY, USA

Atopic dermatitis (AD) is the most common chronic inflammatory skin disease that often precedes the development of food allergy and asthma. Population-based studies in the United States suggest that the prevalence is about 15% to 25% for children and 3% to 7% for adults.1,2 Approximately 20% to 30% of patients suffer moderate-to-severe AD further demonstrating the large unmet need for safe and effective therapies and the long-term disease control in children and adults.

The pathophysiology of AD is much more complex than that of psoriasis and has presented difficulties with further drug development because the optimal approach has been difficult to discern. Pharmaceutical companies were unsure whether to attack AD from the angle of immune response or the skin barrier function because both therapeutic strategies have shown effectiveness in the treatment of AD.

It was demonstrated that AD and psoriasis have few similarities on both the tissue and cellular levels (Table).3 In fact, both T-cell mediated inflammatory diseases are similar in epidermal keratinocytes respond to T-cell derived cytokines by altering growth and differentiation responses, accounting for major parts of the overall disease phenotype.4

Although AD and psoriasis have significant similarities, especially in terms of the high numbers of T cells in the dermis and epidermis, it was observed that the cytokines produced by the T cells were very different between diseases.3,4 Psoriasis is a disease largely driven by Th17 T-cells and associated IL-17 activation, while AD has a strong Th2 T-cell component associated with IL-4 and IL-13 over-production.3 Psoriasis represents an example of a disease driven by a single polar immune pathway, while two T-cell subsets (Th2 and Th22) are commonly present and activated across the major subtypes of AD.6 Therefore, psoriasis is centered on Type 17 responses, while AD is Type 2 and Type 22-skewed with common Type 1 polarization in chronic lesions.6

A new paradigm of AD pathogenesis that recognizes the importance of determining pathogenesis as either a barrier issue or an immune abnormality as well as recognition of the progressive activation of Th2 and Th22 immune axes from the acute to chronic phases of AD has been suggested.7 As the disease likely incorporates an immune abnormality, it is this immune abnormality that perpetuates the disease phenotype. This process begins with cytokine elevation in the non-lesional skin, with increase in acute disease, and is further amplified in chronic skin. These cytokines lead to numerous changes such as downregulation of antimicrobial peptides, downregulation of barrier factors (filaggrin, loricrin, and lipids), itch/scratch cycle, and hyperplasia development—all of which lead to chronic disease.

It is well known that psoriasis is a systemic disease, but recent research has demonstrated the systemic nature of AD by showing that patients with AD have higher immune activation than psoriasis patients with the same moderate-to-severe disease activity.8,9 In addition, patients with AD had increased levels of activated T cells, circulatory cytokines, and CVD markers. Further reinforcing the cardiovascular link was a meta-analysis performed by Ewald in 2015 that noted an increase in atherosclerotic signaling in patients with AD.5 Two additional studies that showed an association between CVD and AD included findings from Silverberg (CVD and myocardial infarction) and Hjuler (coronary artery calcifications) in 2015.10,11 Serum C-reactive protein (CRP) has also shown a strong correlation with AD severity, even more so than lactate dehydrogenase, and CRP testing is recommended in moderate-to-severe AD patients.12

To learn more about the different immune axes involved in AD, investigators are studying dupilumab, an IL-4Rα monoclonal antibody that potentially inhibits both IL-4 and IL-13 signaling. Dupilumab has been shown to downregulate Th2 cytokines and downregulate Th17 and Th22 markers, with significant results at a dose of 300 mg and mixed results at 150 mg.13,14 The 300 mg dose of dupilumab also demonstrated statistically significant reduction in Keratin 16, a marker of proliferation, which shows improvement in hyperplasia.14

Dupilumab also showed a significant reversal of the AD phenotype as early as week 4 and week 16:15 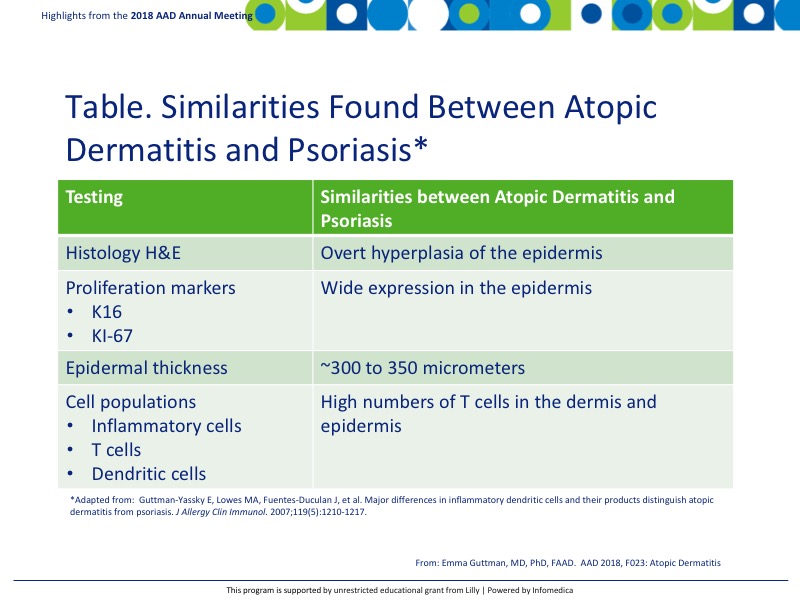 
Presenter disclosure: The presenter has reported that no relationships exist relevant to the contents of this presentation.